Nearly six months after the large waterfall drop of equity prices in March, most broad indexes have found their way to a better place. For the third quarter, the Dow Jones Industrial Average (DJIA) advanced over 7% and the S&P 500 index (S&P 500) rose over 8%. Although the quarter was strong, the month of September brought these two major indexes their first negative returns since March. For September, the DJIA moved over 2% lower, while the S&P 500 was down almost 4%. Many media outlets reported that the late September decline was because developments on Capitol Hill overshadowed the positive data on housing and jobs that had been a focus for much of the quarter. (Source: MarketWatch 9/30/2020) 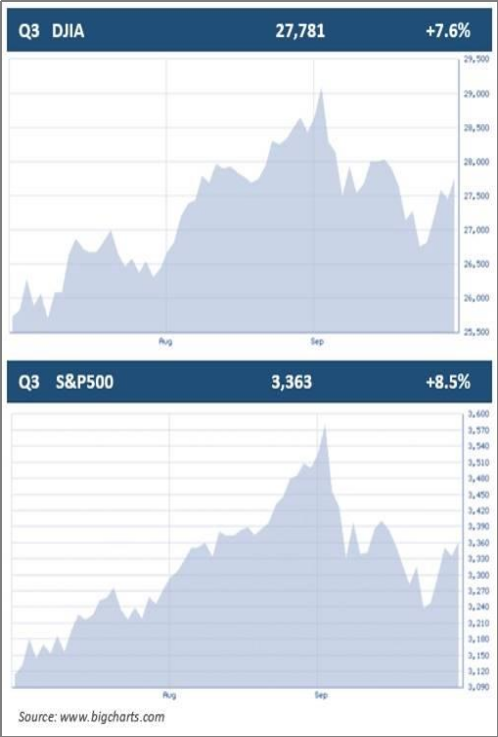 Positive signs for the quarter included the fact that home-contract signings were at a record high in August, according to the National Association of Realtors. Also, Automatic Data Processing said 749,000 private-sector jobs had been created in September, ahead of estimates for a gain of 650,000, and the strongest reading in three months. (Source: MarketWatch 9/30/2020)

Not all the statistics released this quarter were healthy. For example, the Commerce Department revealed on September 29th that personal income—a measure of what Americans received from salaries, investments, and government assistance programs—fell 2.7% in August from a month earlier. The data showed that this decline was due entirely to a drop in unemployment benefits. While the quarter included many inconsistent data points, the overriding theme for many investors is that there is still a high degree for concern as we await more positive data on potential coronavirus treatments. (Source: Wall Street Journal 10/1/2020)

The Federal Reserve has pledged to keep interest rates low for years and so the days of relying on strong returns from money market accounts and certificates of deposit may be in the rear-view mirror. While many investors this quarter enjoyed an increase in equity prices, some analysts caution that based on historical numbers, like price earnings, the case can be made that equities are highly overvalued and overpriced. Others debate that with ultra-low interest rates and high levels of liquidity, equities are still attractive.

This quarterly update’s goal is to focus on a few of the central themes for investors. With markets entering Fall, a time period that has historically been associated with heavy volatility, investors should consider focusing on their personal objectives and timeframes. 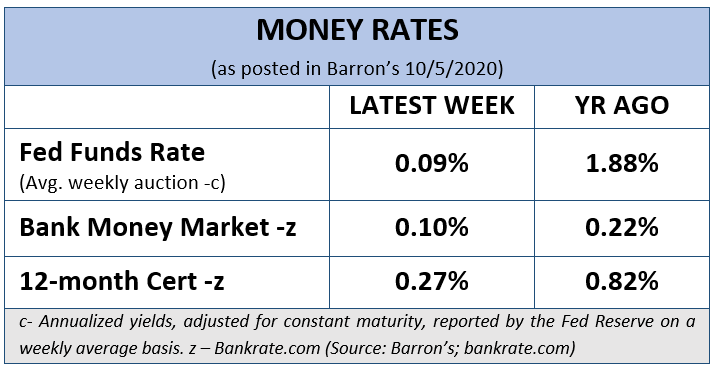 1.Equity markets had strong results for the third quarter.
2.Interest rates are still in the spotlight as the Fed says they will keep rates near 0% till 2023.
3.Unemployment strengthened, but the economy is still challenging.
4.The U.S. political situation adds to the current environment of uncertainty.
5.Investors should fully commit to realistic time horizons.
6.Now is the ideal time to revisit your personal objectives and the strategies to achieve them.
7.Call us with any questions.